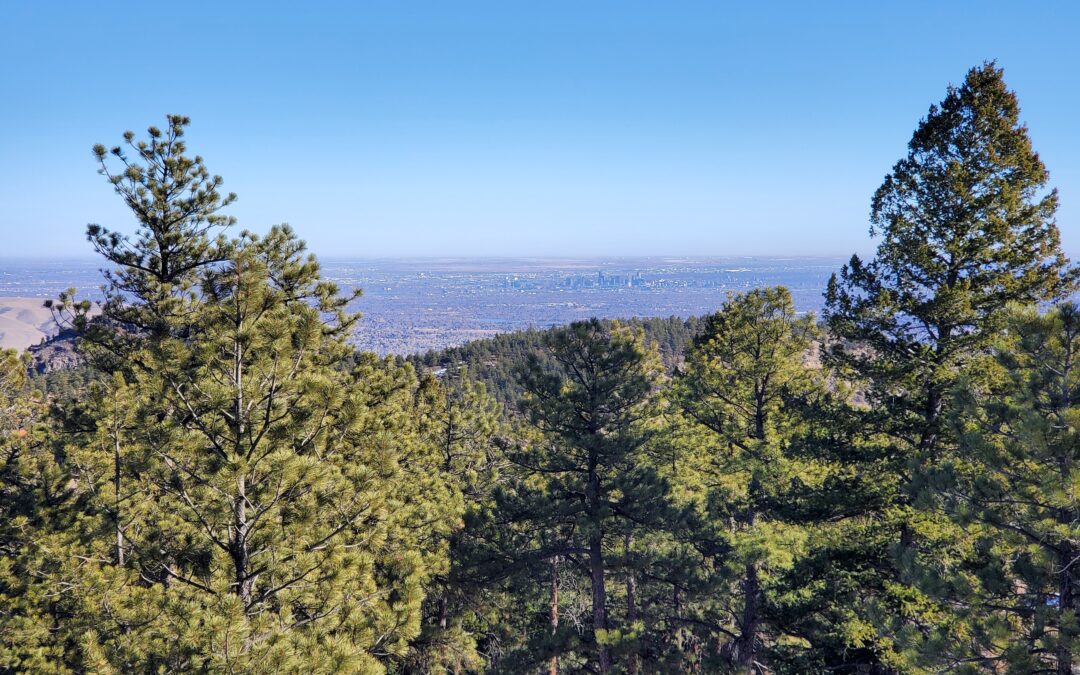 Mount Falcon is a very scenic county park in Morrison, Colorado that offers more than 12 miles of challenging hiking and multi-use trails in an over 2,000 acre park. Only the relatively short (1.7 miles) Turkey Trot trail is marked for hiking only, making Mount Falcon a popular destination for mountain bikers and horse back riders. Mount Falcon’s peak is at 7,841 feet, and the surrounding trails offer more than 1,000 feet of climbing and descending between incredible views of Morrison, Red Rocks, and the front range. 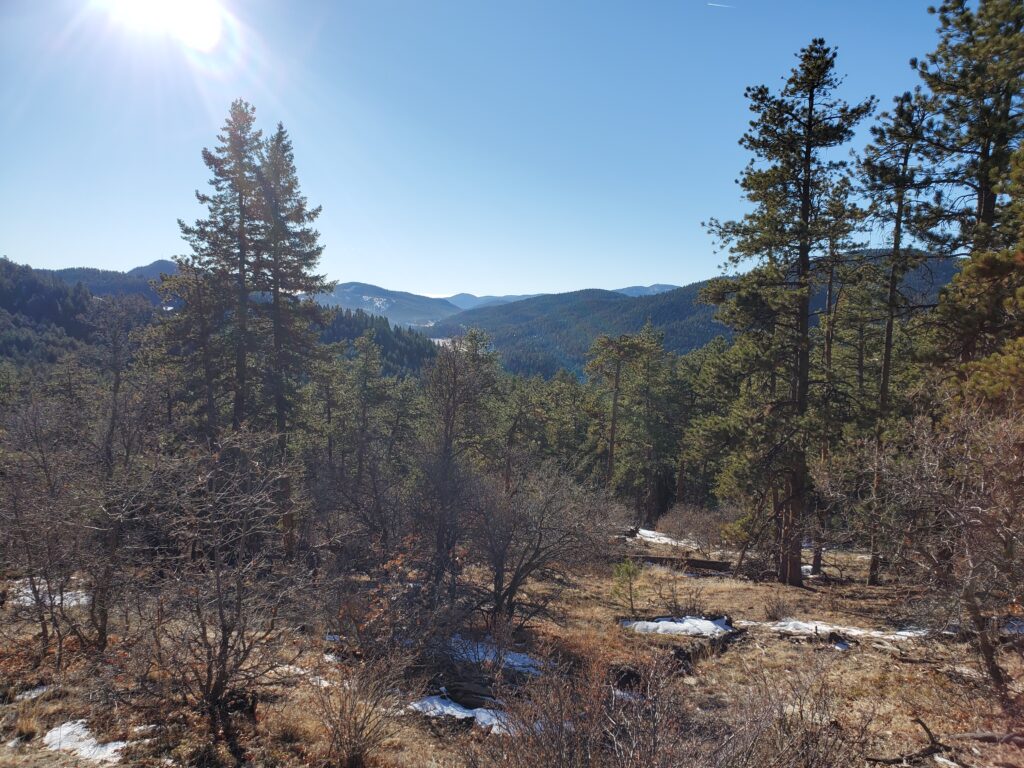 Mount Falcon Park has two major trailheads, one on the East side closer to Morrison and one on the West. The East trailhead is located at 3852 Vine St, Morrison, CO 80465, and offers a large parking lot with restrooms and picnic areas. The hike up the Castle Trail from the East is one of the more challenging hikes in the park, climbing more than 1,000 feet in the first 2.5 miles to the main part of the park. The hike from the East trailhead also offers amazing views of nearby Red Rocks amphitheater and downtown Denver. 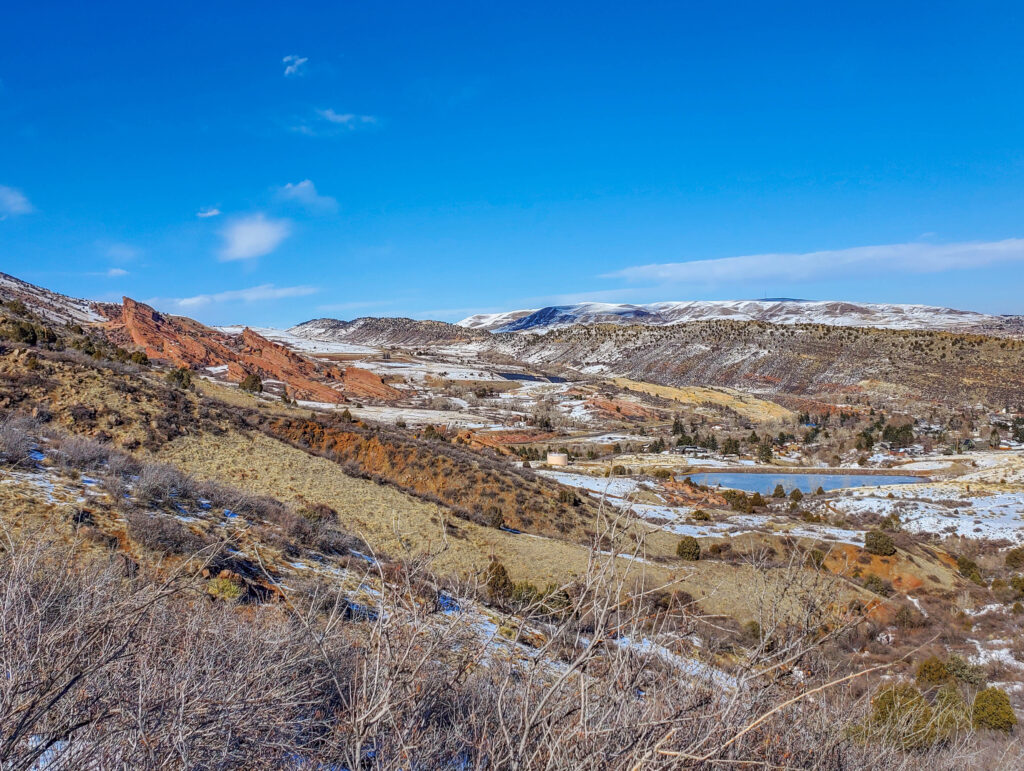 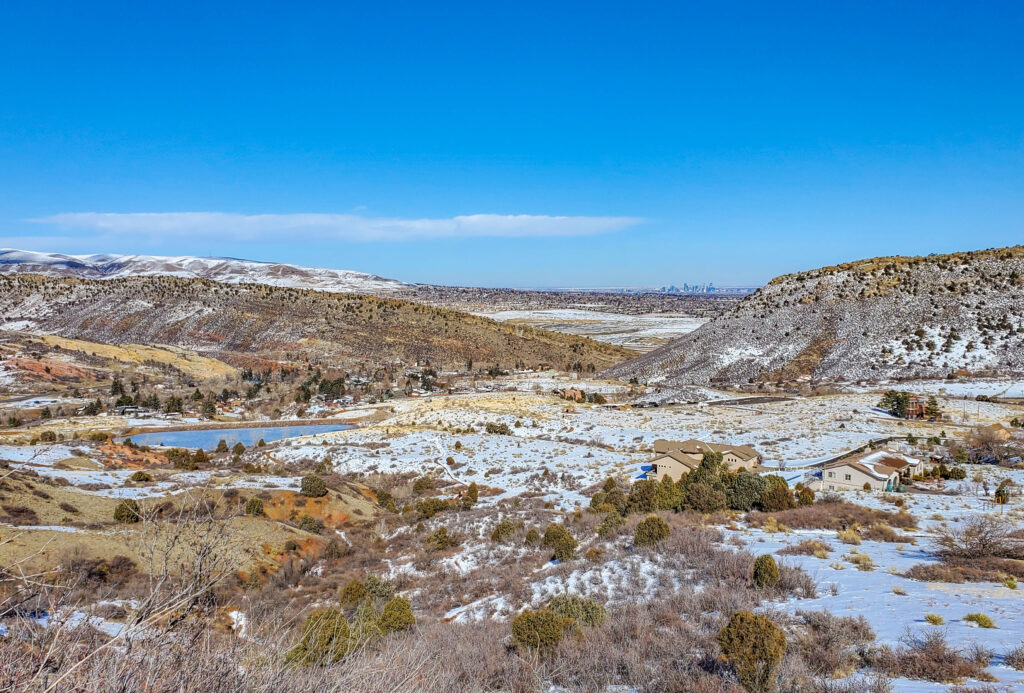 The West trailhead is located at 21074 Mt Falcon Rd, Indian Hills, CO 80454, and has two parking lots as well as restrooms and picnic areas. 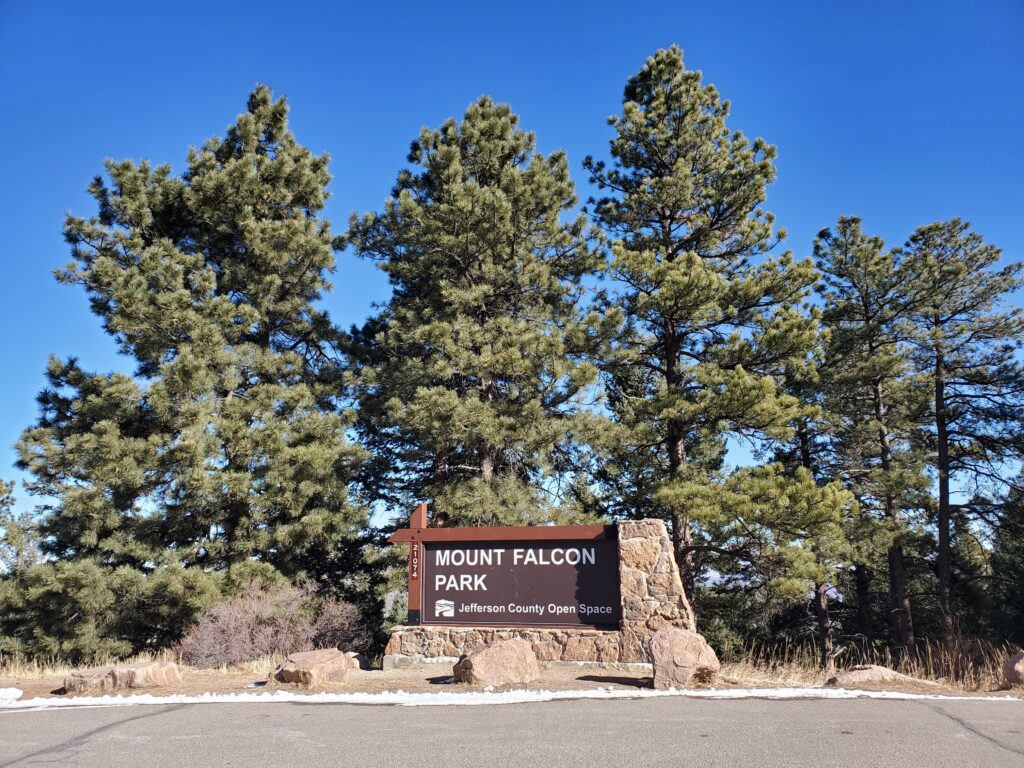 There are at least six or seven trails shown on the official trail map on the county site at: Mount Falcon Map. But, there are really only two major trails to be concerned about. First is the Castle Trails which runs generally East to West across the entire park. The Castle Trail is approximately 3.6 miles in length, and as discussed before has some significant climbing if you start it at the East trailhead. From the West trailhead the Castle Trail is more level and less challenging, and also is closer to some of Mount Falcon’s more interesting sights. Approximately 3/4 of a mile in from the West you’ll pass the Walker home ruins on the left. John Brisben Walker was a very interesting guy who attempted to develop Mount Falcon starting with the construction of his castle-like rock home in 1909. He had a pretty significant fortune to invest, as he had built Cosmopolitan magazine from 1889 to 1905, and then sold it to William Randolph Hearst for a substantial amount. His castle was unfortunately destroyed by lightning in 1918. 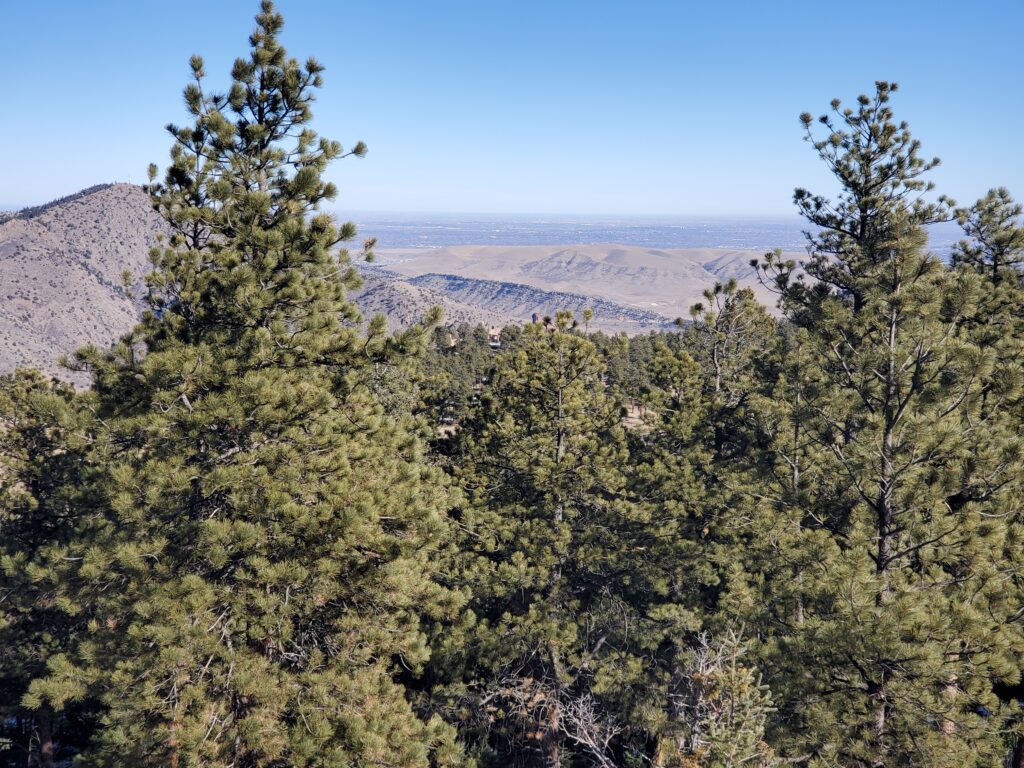 Another half mile along the trail to the left you’ll see the start of the Walker’s Dream Trail. The half mile Walker’s Dream Trail is called that because he attempted to build a building there in 1911 that he intended to become a Summer White House for U.S. Presidents to stay in. Unfortunately his plan never came to fruition and he abandoned the project with nothing more than a section of foundation and a cornerstone which you can still see on the trail.

The other major trail from the West trailhead is the Parmalee Trail. Parmalee is a three mile loop trail, if you include short sections of the Tower and Castle trails required to get back to the parking log. Parmalee is marked as a black diamond (Most Difficult) on the map, because it winds up and down around the peak of Mount Falcon down a couple of valleys and over a couple of ridgelines. It’s not particularly challenging hiking, but does feature more than 1,000 feet each of descent and climbs over it’s three mile distance. The trail is rocky and steep in sections, but has some amazing views of the nearby forest and the peaks of the front range. 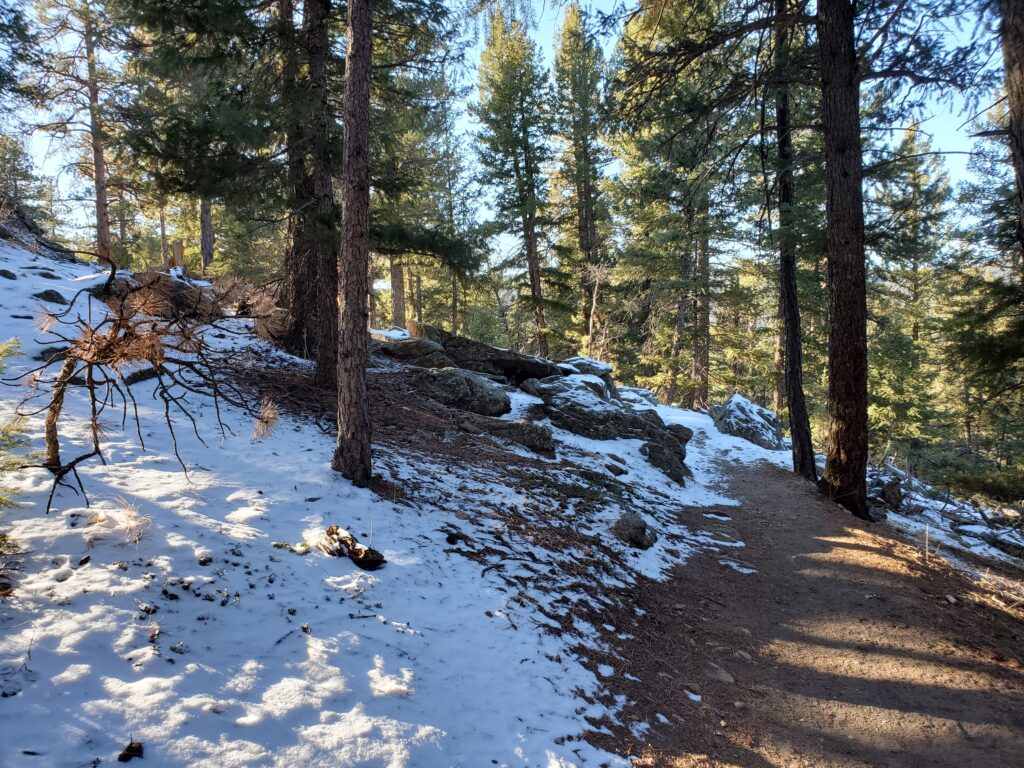 The Castle Trail and Parmalee Trail are connected by two short sections of trail called the Meadow Trail. The Meadow Trail is less than 3/4 of a mile in length, and basically flat as it traverses the meadow across a plateau near the peak of Mount Falcon. 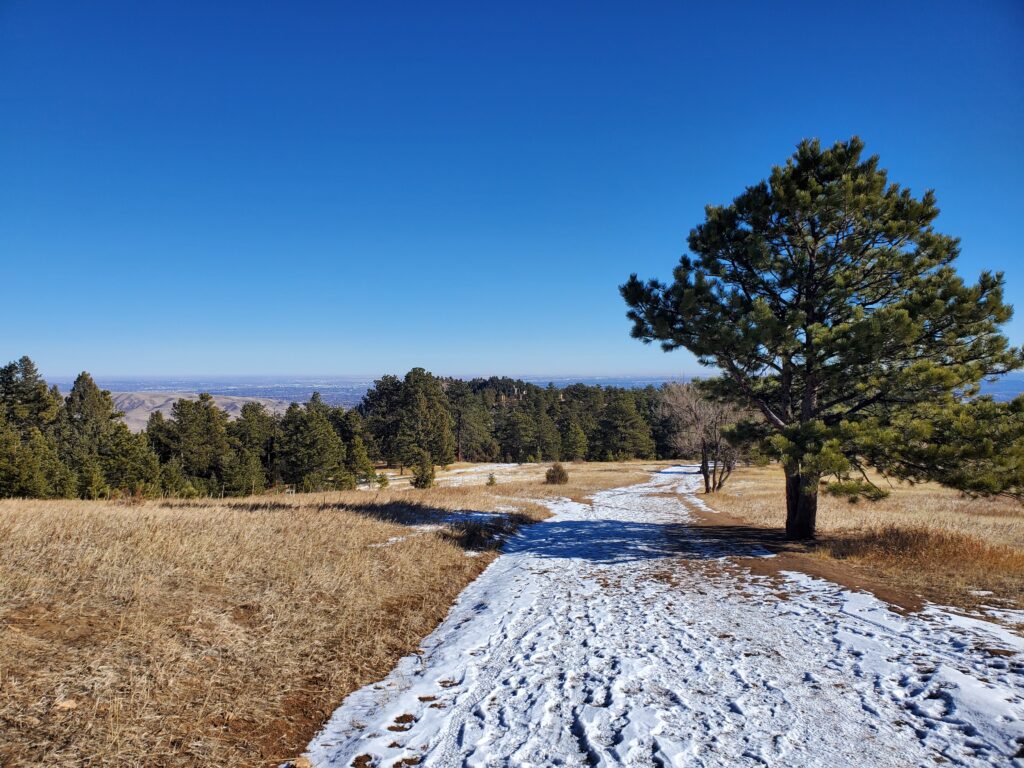 The Castle Trail and Meadow Trail are also connected by the short (less than 1/2 mile) Tower trail that leads to a couple of scenic overlooks. The first is the actual tower, a fire tower near the peak of Mount Falcon. The tower wasn’t open to the public when we were there, but there is still a great view from the nearby peak. The second scenic overlook is called Eagle Eye Shelter, a nice picnic shelter built on the site of a family cabin that was located here from 1933-1972 and used as a summer cabin by the Kirchhoff family. 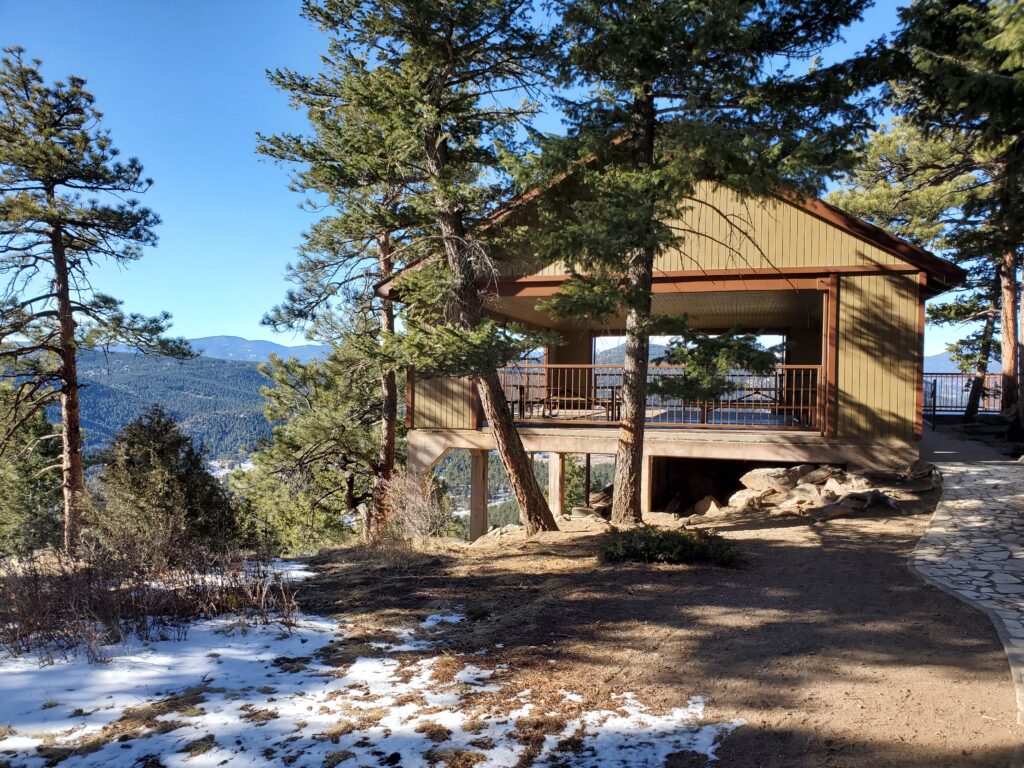 Mount Falcon is a great place for a scenic and challenging hike, close to the city and nearby to Red Rocks and Morrison. It’s combination of beautiful forests, outstanding views, and historic sites makes for an interesting and fun hiking or mountain biking experience.