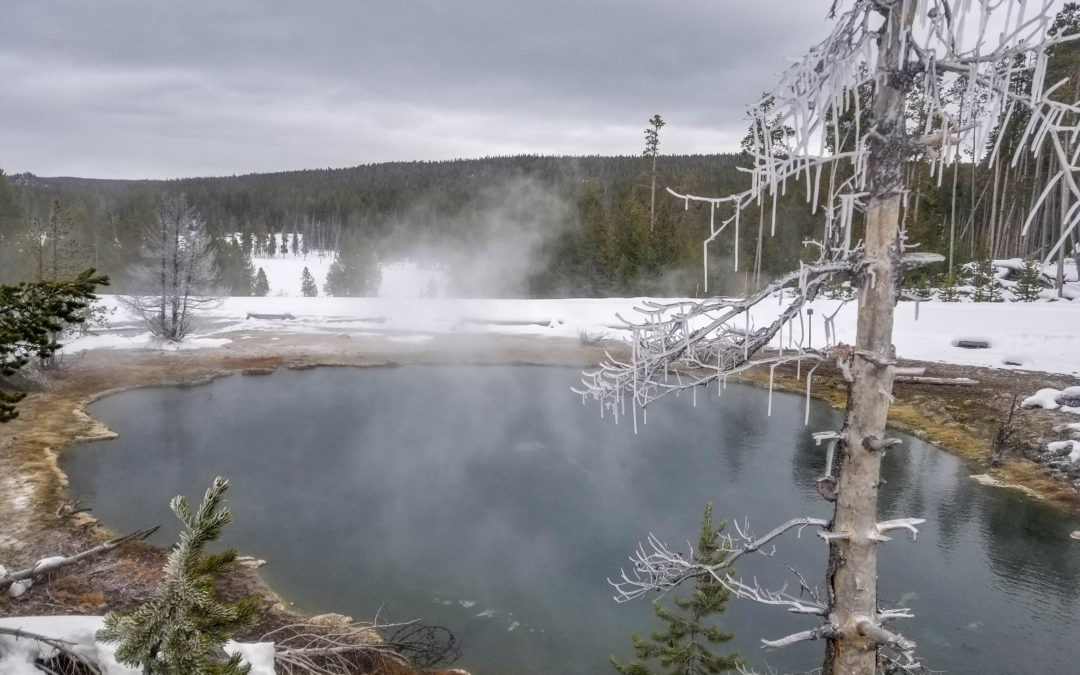 Yellowstone National Park is America’s first national park, established by President Ulysses S. Grant in 1872. Also one of the countries largest National Parks, it covers nearly 3500 acres in Wyoming (96%), Montana (3%), and Idaho (1%). We’ve visited the park several times, in various seasons. But, we keep coming back in the winter for the less crowded, more natural look at the wildlife and the park’s features.

The majority of the park’s roads are closed in the winter, so vehicular travel is limited to licensed tour companies and employees. We’ve visited the park in two different types of snow coaches, and on snowmobiles, and each one offers unique advantages to the Yellowstone traveler. Only the park’s North entrance is open to vehicle traffic in the winter, but four other entrances are open to licensed tours. We’ve visited through the West entrance in West Yellowstone, which is an hour and a half south of Big Sky Resort, or a little more than 2 hours south of Bozeman, MT. When skiing or visiting Jackson Hole the South entrance is more convenient, also about an hour and a half drive from the resort.

The two types of snow coaches are traditional 12 or 15 passenger vans converted to snow coaches with the addition of a sort of tank tread that replaces each of the van’s wheels and tires. These coaches are smaller than the alternative, and seemed to make more stops. But, they were also a little less comfortable and more crowded for our group. Our van was also location of one of our favorite travel misunderstandings when I asked for a bottle of water, and my brother gave me a bottle of the “special water” (Tito’s Vodka). Needless to say, I was a little surprised!

The second type of snow coach that seems to be growing in popularity is a converted yellow school bus with huge low inflation tires to handle the snow. These buses accommodate larger groups (25-30 people), and are much more open and comfortable for the group. As a side bonus, the low inflation tires also made the ride quite a bid more comfortable on the bumpy winter roads throughout the park.

Here’s what the school bus show coaches look like. 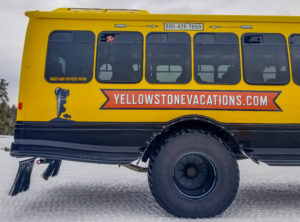 We’ve also taken advantage of the snowmobile tours, and thought they offered a uniquely different view of the park. The snowmobiles can travel quite a bit faster in the park, and seem to stop more frequently to take in the sights. But, they also are a little more of a solo adventure since each carries one or two travelers in helmets and snowmobile suits. This makes them a little more adventurous option, but also a little less comfortable and conversational. It was also more difficult to take a lot of photos in the park, except when the snowmobile parade stopped.

Here’s a picture from snowmobiling just outside the park with a snowmobile company from Jackson Hole. Like I said, a little more adventurous look at the park, especially when the park’s getting 12″ of new snow during the day! 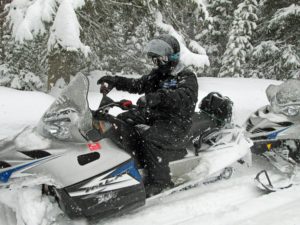 Yellowstone has a ton of wildlife and other sights to see, but our guide said in the winter most of the elk and bison stay outside the park’s boundaries. That didn’t stop us from seeing a lot of wildlife in the park, including birds (eagles, ravens, white swans), wolves, bison, elk, otters, and other park natives throughout all of our visits. 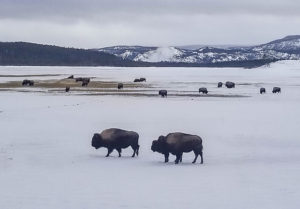 Interestingly, Yellowstone wasn’t established to protect the land or the wildlife for future generations. It was intended to protect the unique geothermal attractions throughout the park. The park was formed 600,000 years ago when the still-active volcano erupted, creating a caldera over 35 miles long and 50 miles wide. This geology has created and sustained a variety of geysers, hot springs, fumaroles, and mud pots, the four types of thermal features throughout the park. Each of the tours offers the opportunity to stop at several of the features, and enjoy the boardwalks that make viewing them accessible.

A view of one of the hot springs in the park. 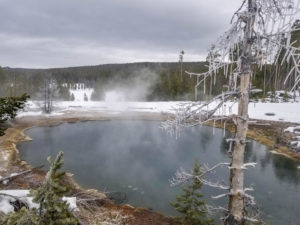